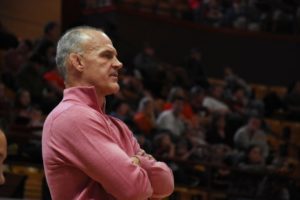 Kevin Dresser is returning to his home state to become the new wrestling coach at Iowa State.

The 54-year-old Humboldt native built a national power at Virginia Tech. Inheriting a team that won one dual in the year prior to his arrival, Dresser has led VT to Top 10 finishes at the NCAA Championship the last four years – including an all-time best fourth in 2016 – and it is currently ranked fifth. Dresser’s Hokie teams captured five ACC Wrestling Championships (two tournament and three dual titles) in the last five years. His teams also won 91% of their duals (48-5) the last three years.

“I am thrilled to have the opportunity to lead one of the nation’s most storied and accomplished college wrestling programs at Iowa State,” Dresser said.  “Growing up in Iowa, I admired the sellout crowds at Hilton Coliseum and watching championship coaches like Dr. Harold Nichols and Jim Gibbons and countless All-America Cyclones.”

As a competitor, he won two state titles and compiled a 112-11-1 record at Humboldt High School before a distinguished collegiate career at Iowa. The two-time All-American and two-time Big Ten champion won the 1986 NCAA Championship and placed fourth at the national meet in 1985.