You are here: Home / News / Public workers’ pensions may be next Iowa GOP reform effort 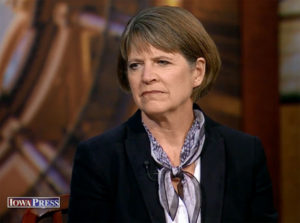 “I hope they are teeing up the look at what we have. Is it the best thing going forward for new employees? We need to do some things different,” Gretchen Tegeler, who served as Branstad’s budget director in the 1990s, said on IPTV’s “Iowa Press” program this weekend.

Tegeler is now president of the Taxpayers Association of Central Iowa. Branstad has indicated he wants Tegeler to be part of a review of public worker pensions.

“Pension reform means lots of different things,” Tegeler said. “It’s very important to understand that our approach is about retirement security. The people that are in these plans now, if we don’t do something different for future employees and we continue to compound the risk that is in these plans, then everybody in these plans now is at much greater risk.”

While some public worker pension systems in other states are teetering toward insolvency, Iowa’s system was recently ranked as the 10th best-positioned pension system in the country.

There are four main systems for public worker pensions in Iowa, but by far the largest is the Iowa Public Employees Retirement System, commonly called IPERS. It covers more than 325,000 current, former and retired employees of the state, counties, cities and school districts.

Critics say new workers should no long be promised a defined pension, but instead should invest money in accounts similar to the 401-K programs in the private sector. The Republican leader in the Iowa Senate expressed support for that move three years ago.