You are here: Home / Business / AAA predicts a rise in gas prices by Memorial Day 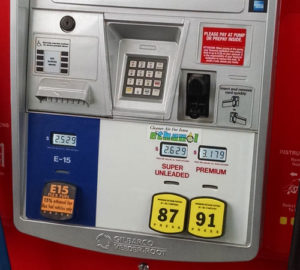 Iowa motorists will likely have to pay considerably more to fill their gas tanks soon, according to a forecast from AAA.

The motor club’s Iowa spokeswoman Rose White predicts the price of gasoline will rise at least 50-cents a gallon between now and Memorial Day, perhaps much higher.

“Prices will be on the increase as more refineries switch to the more-costly-to-produce summer fuel blends,” White says. “That’s coupled with the higher demand you usually see with the onset of the summer travel season.” On the plus side, White says there are no fuel shortages to worry about and crude oil inventories are up eight-percent from a year ago.

“Crude oil prices remain low,” White says. “Right now, they’re still at $53 a barrel. A year ago, they were at $31 a barrel. Typically, with every $1 increase, you see retail pump prices increase 3 to 4 cents a gallon.” While Iowa’s statewide average gas price is now $2.30 a gallon, she says it’s possible some service stations could break three-bucks a gallon by summer.

“We need to keep in mind that some of those communities might just have one single station in a rural area with low volume sales, but they still have the high overhead costs,” White says. “As a result, we always see a wide range of prices across the state.”

Among the state’s metro areas, Des Moines has the most expensive gas at $2.44 a gallon, while it’s cheapest in Cedar Rapids at $2.21. The statewide average of $2.30 is two cents higher than the national average. Iowa’s highest-ever average gas price was $4.02 a gallon in July of 2008.