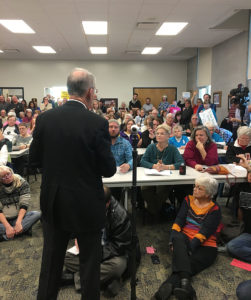 About 200 people crowded into the Iowa Falls fire station early this morning for what turned out to be a rowdy town hall meeting with Senator Chuck Grassley.

Jim Kessler of Grinnell brought up the same topic.

“Your promise to repeal and replace the Affordable Care Act with ‘TrumpCare’ frightens and angers me,” Kessler said.

“Why shouldn’t the Democrats filibuster, obstruct and delay the current president’s nominee to the Supreme Court for a year or even four years given that you’ve set this precedent?” Cooper asked, to cheers. 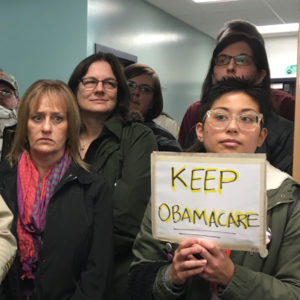 Grassley fielded commentary and questions on a wide variety of topics, from President Trump’s trade policies to the fitness of Trump’s education secretary. Don Jones of Iowa Falls asked a question about the national debt. Grassley said reducing the debt will be difficult because of President Trump’s pledge not to make changes in Social Security and Medicare, then a woman in the crowd said she gladly pays taxes for those things.

“The roads are falling apart. Everything is going to the pits,” a woman yelled.

Jones responded: “I asked him, not you, so shut your hole.”

As many in the crowd booed, one woman quipped: “Well, that’s Iowa nice.”

At the end of the forum, another man in the back of the room thanked Grassley for visiting the community.

“There is a movement in California. They want to leave the union because they’re so unhappy. I say let ’em go and let all these fruitcake Democrats go,” he said, prompting applause and cheers from some and boos from others. A few continued to yell questions at Grassley and others chanted “out of Trump” as Grassley left the room. 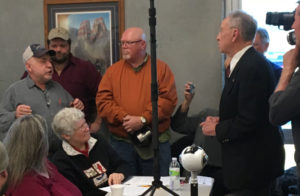 After the event, Grassley spoke with reporters about the experience.

“I don’t think people had a chance to hear me as much as they normally would at a town meeting because there were long speeches and some applause and some interference, so they didn’t get my point of view,” Grassley said, “but if they want me to listen to ’em, I’m willing to listen to ’em.”

Grassley said today was “nothing” compared to the huge and “intense” crowds that confronted him in the summer of 2009, urging him to oppose the Affordable Care Act.

Today’s forum ran from 7:45 to 8:45 a.m. Near the end of the hour-long forum, Grassley and Petersen, the farmer from Clear Lake, had one of the morning’s lighter moments.

“With all due respect, I don’t know where to start and where to end, but I’ve got a present for you if you want ’em,” Petersen said, holding up a bottle. “It’s called Tums. You’re going ot need ’em in the next few years.”

Grassley later told reporters the only time he gets an upset stomach is when he eats chocolate ice cream before he goes to bed. Grassley will hold another town hall meeting in Garner this afternoon.