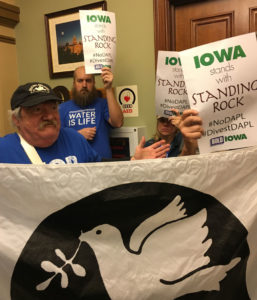 Protesters in the governor’s office.

Twenty people began “occupying” the governor’s office early this afternoon, a protest over the Dakota Access pipeline which passes through Iowa. At 5 p.m., four were arrested for trespassing when the office closed for the day.

Frank Cordaro, a spokesman for the group, says continued reliance on oil will cause “more dirty wars.” “It’s oil-based this. It’s oil-based that,” Cordaro said. “We’ve sold our soul to oil.”

The protesters asked to speak with Governor Branstad and Lieutenant Governor Reynolds, but neither were in the office today.

“There’s a lot of baloney going on in this rigged system,” Cordaro said. “That’s not my words. That’s the presidents, so this is a rigged scene about big oil interests.” 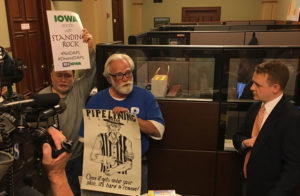 Similar protests were staged in other states. The pipeline is to ship oil from North Dakota to a refinery in Illinois. The route through Iowa has been completed, but an uncompleted portion of the pipeline in North Dakota has been the focus of intense protests.

Tonight is the deadline for protesters in North Dakota to clear out of their encampment at the site.