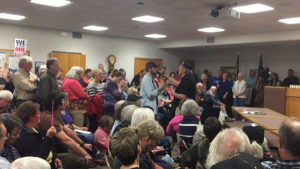 “I am o.k. with people coming out and exercising the right to free speech,” Ernst told reporters in Clinton after a private meeting in that city later Tuesday. “They certainly can do that, but what is concerning is that when are we going to start coming together and having a productive dialogue.”

“It was really hard. We had a veterans roundtable and we’re gathering a lot of information about veterans initiatives and where we need to do better, so there were a number of issues that were presented and it was really hard to delve into those issues…when you had so many other people talking over those veterans,” Ernst told reporters in Clinton.

“For the most part, the crowd tried to remain respectful of those veterans that actually attended to get their information to us, but there were others that were just so angry that it didn’t matter what the discussion

The crowd at the Grassley town hall.

was, they weren’t going to pay attention.”

Grassley told Radio Iowa this morning that he “enjoyed” interacting with the people who attended his town hall meetings in Iowa Falls and Garner yesteray. Grassley said the crowds were “rambunctious,” but he doesn’t think any of them were paid protesters.

“I wouldn’t have any evidence they were paid to be there,” Grassley says. “I think they’re just devoted citizens to expressing their views. They’re very, very, very intense on the things they believe, probably very irritated because Hillary Clinton lost.” 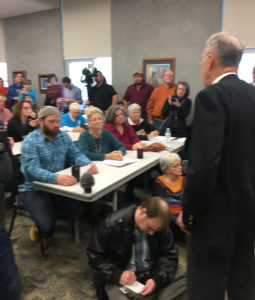 Grassley said he’s “glad” his two events and the one Ernst held in Maquoketa got national media attention.

Grassley said “representative government is a two-way street” and he told radio reporters this morning that “face to face dialogue” with voters is vital.

“I would just simply say I see it the way I see it, as just interested constituents who want their views to be known and they feel very strongly about them.” Grassley said.

Ernst told reporters in Clinton yesterday that Republicans in Washington are focusing on promises made to voters during 2016.

“What we have seen is a president now that’s transitioned into the administration. He’s doing everything that he said he would do when he was out on the campaign trail, so people shouldn’t be surprised at his actions out there,” Ernst says. “Nor should they be surprised that in the senate we’re trying to get down to work…to move in the direction that they asked us to move in this last election cycle.”