You are here: Home / News / Iowans to get harsh reminder it’s still winter 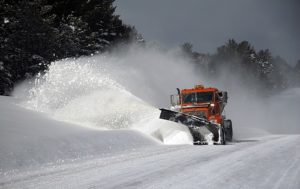 Iowa’s flirtation with spring-like weather will be coming to an abrupt end soon. National Weather Service meteorologist Kurt Kotenberg says it will include a roughly 40-degree swing in temperatures.

“Temperatures are going be back down into the 30s. I think on Saturday a lot of Iowa is going to lucky to even hit 30 degrees,” Kotenberg says. “It’s going to windy – think of those raw, windy days with winds of 20 to 30 miles an hour from the north. So, we had a small taste of spring this week, but it’s really going to flip this weekend and we’re going to see winter come back in full force.”

Rain and snow are also in the forecast. “We’re going to have that magical 32-degree line cutting right through the heart of the state from southwest to northeast,” Kotenberg says. “So, it looks like (southern) Iowa will see more rain than snow.”

A Winter Storm Watch covers 19 counties in northwest and north-central Iowa from Thursday night through Friday evening. “It’s looking like, right now, portions of northwestern Iowa will hit that 6 to 10 inch range and couple places could see more than a foot of snow,” Kotenberg says. “It looks like this will be a drawn out event, as well, with the snow lasting most of Friday morning, all of Friday, and into Saturday morning.”

Kotenberg notes the amount of snow won’t be the biggest factor in travel conditions — it’ll be the strong winds, with gusts up to 40 miles an hour. “When you have any snow that falls with winds that are that strong, we could see blowing and drifting snow, visibilities well under a mile, and even snow that’s been plowed by snowplows…that can be blown back onto roadways,” Kotenberg says.

The snow and cold spell won’t be hanging around too long. Temperatures are expected to climb back into the 50s by next Tuesday and Wednesday.