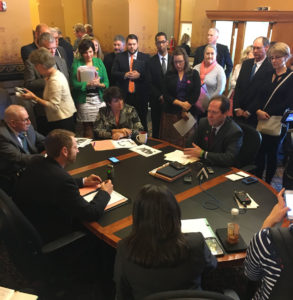 Members of a House subcommittee discuss the medical marijuana bill.

Advocates for a bill that would set up state-sanctioned operations to grow marijuana, make cannabis oil and dispense it in Iowa are at the capitol today, urging legislators to act.

“While on vacation this last summer in Denver, my husband persuaded me to try medical cannabis…I can tell you that the first night I took it, I slept through the night for the first time in six and a half years,” said Carrie Anderson of Grime, who has M.S.

The bill’s first draft calls on the University of Iowa’s School of Medicine to recommend a list of “debilitating medical conditions” for which cannabis oil could be prescribed and the legislature would have to approve the list. The pressure is on to act, since Iowa’s current law which decriminalized possession of cannabis oil for treatment of chronic epilepsy expires this summer.

Sally Gaer of West Des Moines is among the mothers who successfully lobbied for the current law. Gaer’s 26-year-old daughter Maragaret has been taking cannabis oil since 2015.

“Her seizures have decreased. Her weight has dropped by 30 pounds. Her alertness has increased and she sleeps all night,” Gaer said. “…We are not willing to give up her CBD oil. It has made such a positive impact on her life. To have the possibility of having her CBD oil grown, processed and dispensed in Iowa would be wonderful.”

Three legislators signed off on the bill today, making it eligible for a vote in a House Committee. Twenty-eight states and the District of Columbia have laws which allow some form of marijuana to be prescribed for treatment of medical conditions.