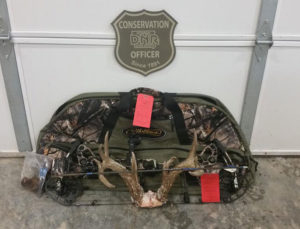 “He approached the two gentlemen walking toward his property on the road there and one of them went and hid in the neighbor’s yard. And he went and got the license plate info and talked to the other gentleman and he mentioned something about having car trouble. That was pretty much the extent of it that night,” Eighmy says.

That was on November 11th. The homeowner took some video of other activity around his home and then ten days later the he made a discovery. He says the landowner was out doing yardwork when he smelled something rotting and discovered a headless buck on the property near his house.

Eighmy says the man later found an arrow near where the truck was parked on the surveillance video. Eighmy says he was able to use the information on the license plate and surveillance video to track down 41-year-old Christopher Husted of Grimes as a suspect in the poaching. Grimes had already taken a deer under a license while living in Norwalk.

“Through our interview process he admitted to shooting that buck that evening by himself in the truck. He shot it out the window of his truck with his bow,” Eighmy says. He says Husted came back with a friend to try and get the buck in West Des Moines when they were stopped by the landowner. The man came back the next day and found the buck and cut its head off.

The buck had an 11-point rack on it. Husted pleaded guilty to illegally taking wildlife, trespassing while deer hunting, abandoning wildlife and not having a valid deer tag. He was fined $756 and ordered to pay $4,000 in civil penalties for the buck. Husted also faces license suspension for two years in Iowa and 44 other states that are part of the Wildlife Violator Compact.

Eighmy says the landowner was key to making the case. “If I wouldn’t have had the plate information, it would probably still be under investigation,” Eighmy says. He says its not uncommon to have poaching in metro areas of Iowa, but he says it is sometimes tough to find the individual involved. The deer was shot with a compound bow. Eighmy says poachers often use a bow for its stealth. 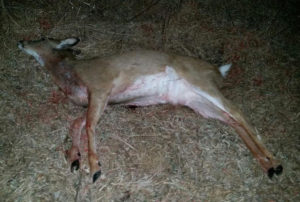 The other case involved 49-year-old Roy Penney of Johnston. Penney pleaded guilty to using a motor vehicle to take deer, wanton waste of game, hunting in a refuge, failure to tag the deer and interference with official acts. Eighmy says Penney was asking questions of a park aide working at Big Creek State Park near Polk City and that raised suspicion. They started doing some checking after finding deer that was shot with a crossbow.

“We can do some searches within our system as far as people who might have crossbows….people who might have muzzleloader tags, and we knew a first name. So, that pretty much limited our search down to maybe eight people,” Eighmy explains. He says Penney showed back up to get the deer and was arrested.

He says it was eight or nine hours later and they were still at the park doing their investigation and Penney came back and they stopped him. Eighmy says Penny admitted to shooting the deer from his car with a crossbow, even though Big Creek is a wildlife refuge and the deer there are protected.

Penney was fined $1,110 and assessed $1,500 in liquidated damages for the doe deer. Penney is subject to a two year license suspension in Iowa and 44 states that are part of the Interstate Violator Compact.