You are here: Home / News / ‘Dramatic and historic’ gun bill gets airing in statehouse hearing 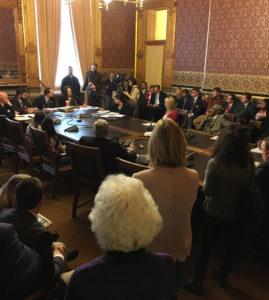 Legislators hold a hearing on the gun bill.

A bill dealing with a wide range of gun-related issues was the subject of a sometimes emotional hearing today at the statehouse.

Representative Matt Windschitl, a Republican from Missouri Valley, is a leading gun rights advocate in the House. Windschitl said his aim is to “protect Iowans.”

“This is a work in progress. This is not the final product,” Windschitl said to open the meeting. “We are here to take input, take suggestions and then take it back to the members of the House and find out where we can move forward in advancing Iowans’ Second Amendment rights.”

David Walker, the retired dean of Drake University’s law school, said the “stand your ground” provisions in the bill will give “psychological encouragement” to “vigilantes.”

“I’m afraid that it will make people more trigger happy,” Walker said. “They’ll think: ‘Well, we have ‘Stand Your Ground,’ I can do this.’…It’s dangerous.”

Laural Clinton of Des Moines is a gun owner with a concealed weapons permit, but she opposes the bill. Clinton, who is African American, said she’s worried her sons will be targeted if Iowa gun owners get new “stand your ground” permission to fire in self-defense.

“I have a 19 year old who goes to college and that scares me because he looks like that kid, in a hood, that everybody fears,” Clinton said.

In addition, the bill would allow guns in a variety of places that are currently “guns-free” zones. The Iowa Hospital Association opposes letting people carry guns into hospitals. Jim Atty, the CEO of the Waverly Health Center, said an emergency room can be a “volatile” place.

Officials at Iowa’s three public universities as well as all 15 communities colleges oppose the bill, too, because it would allow people to carry guns on college campuses.

“It really opens up a door that we don’t need to, so we hope you’ll take that section out,” said Jim Kersten, a lobbyist for Iowa Central Community College in Fort Dodge.

The bill also would let people carry a concealed weapon into the state capitol building.

“We know that we have these conventious conversation and that seems counter intuitive,” said Connie Ryan, a lobbyist of the Iowa Interfaith Alliance.

The bill has the backing of key organizations, like the National Rifle Association.

“For the past decade, we’ve been fighting this fight, trying to get something like this bill passed in this state,” said Scott Rausch, the NRA’s state director.

“This is a dramatic and historical step forward towards abolishing the Second Amendment as being a second-class right in the State of Iowa,” Snell said.

Another speaker at today’s hearing on the bill accused lawmakers of “being pimped out” by the gun groups. The next speaker was a woman whose son is on his high school trap shooting team. She urged legislators to scale the bill back and find the “middle ground.”