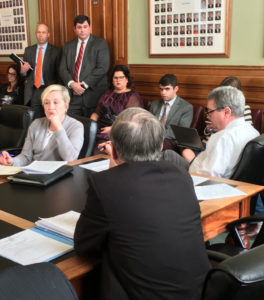 Nineteen Republicans in the Iowa Senate are co-sponsoring a bill that would require Iowa businesses with more than 25 employees use the federal government’s “E-Verify” system to confirm all new hires are citizens or legal residents of the United States.

Dave Stitz is a vice president at the McAninch Corporation, a central Iowa contracting company that’s been using E-Verify for about eight years. Since 2009, the company has had just one applicant who failed the cross-check.

“If they know that a business is doing this, they will not come and apply for work, so they avoid us, which is a good thing,” Stitz says. “Word of mouth (moves) pretty fast.”

Senator Julian Garrett, a Republican from Indianola, says about three percent of Iowa businesses currently use the E-Verify system to ensure they’re following federal law and only hiring citizens and legal residents.

“Their competitors that don’t check and do hire people in the country illegally and pay them substandard wages — I think we all understand that happens — it’s not fair to the people that are obeying the law,” Garrett says.

“It runs contrary to my church’s faith-affirmed responsibility to welcome the immigrant in our midst,” Arnold says.

“The reason for that is when you start messing around with people’s employment, you’re messing around with families,” Chapman says. “And I don’t think there’s any doubt that if this bill gets passed and starts being enforced, you’re going to start having some problems with people being able to provide for their families and harm real families.”

Madeline Cano of the Iowa Citizens Action Network suggests the requirement would “promote” discrimination against potential workers who are in the country legally and eligible to work.

“There is a stereotype of what an undocumented immigrant looks like,” she says.

The bill cleared a state senate subcommittee late Wednesday afternoon and is eligible for a vote in the Senate Judiciary Committee.

A wide range of business groups are registered as undecided on the bill. A spokesman for the Iowa Chamber Alliance says his group supports mandatory use of E-Verify, but it should be FEDERAL requirement, rather than a hodge-podge of laws from all 50 states. In addition, business groups say upgrades are needed in the system to make it work better.