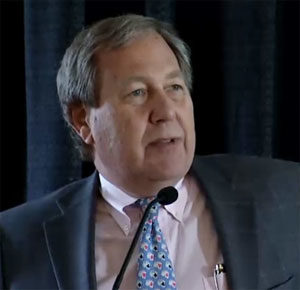 University of Iowa president Bruce Harreld told the Board of Regents today one of the ways his school will make up the $8 million cut in state funding is to cancel some scholarships.

“In order to close this deficit we have decided to end some…non-merit, non-need, non-financial need-based scholarships. And we start sharing that news and we will continue it over the next few days,” Harreld says.

Harreld says letters are going out to some 2,400 students who would have been getting the scholarships. “While this is not the happiest news, I am here to provide a commitment to Iowans and the Board of Regents. Moving forward the university will commit to investing each and every additional dollar received in general funding above and beyond our new base of 224 million towards scholarships for these resident students,” Harreld says. He says it is hoped they will be able to fund the scholarships in the future.

“Support obviously that we receive from the state is vital and is needed in order for us to move forward,” Harreld says. “I hope that this is as many have stated, in fact a temporary situation.” 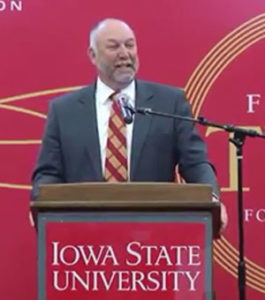 Iowa State University president Steven Leath also talked with the Board of Regents today about how his school is going to try to deal with the state funding cut.

“Our share right now is sitting at eight million dollars. We are trying to be very thoughtful about how we manage this and how we can minimize the affect on what I call the academic core and the students themselves,” Leath says. “However any cut of this magnitude, especially when it is in the middle of the fiscal year is going to have some unavoidable negative consequences — that’s just the way it is.”

Leath says ISU will deal with the cuts in a couple of ways. “The first strategy is deferred maintenance and capital improvement. We’re going to try and absorb a majority of the reduction — 4.7 million or 60 percent of the total reduction — out of deferred maintenance in delaying capital projects. Examples would be improvements to the library, which is heavily utilized by students,” Leath says. He says another example is the delay of renovations to classrooms in Kildee Hall.

The second part of the plan involves employee expenses. “This is gonna be as much as we can the positions that are vacant, and we’ll just not fill them or not fill them for awhile,” Leath explains, “and we’ll gain back about 2.2 million or 28 percent of the cuts this way.”

“Now obviously that’s going to affect staff workload and have some affect on morale. It’s certainly not going to help our 19-1 student/faculty ratio, but we think that’s a reasonable place to take some of this cut. And finally, the part that we haven’t covered yet will be made up in operating expense reductions, which is approximately a million dollars,” Leath says.

UNI President Mark Nook says they will leave open some positions to deal with the cut. “Anytime reductions have to happen midstream, especially this late in the stream, you have relatively limited possibilities for making those reductions. We will be holding a few select positions open…we will fill them eventually, but we are holding them a little while to get some of that revenue,” Nook says.

He says the open positions won’t handle all of the cut and they will also be reducing some of their travel and staff development and deferred maintenance will also help. UNI is facing a $2 million cut.

Leath, Nook and Herreld made their comments during the Board of Regents meeting in Ames.