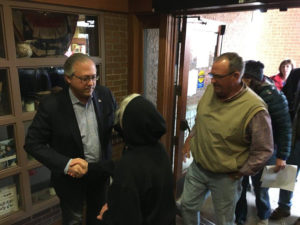 An overflow crowd greeted Congressman David Young at a town-hall meeting in Urbandale yesterday and things got a bit heated at times.

Young, a Republican from Van Meter, fielded questions on a variety of topics for about 75 minutes. Young was asked what he’d change about the Affordable Care Act and some in the crowd reacted angrily to his answer.

“The individual and the employer mandate bother me because I’ve heard from small businesses who aren’t able to grow because of some of those mandates,” Young said and, when the shouting started, Young interjected: “You asked me the question.”

Shortly after this, Young got more boos when he said his previous votes to repeal “ObamaCare” had been mainly symbolic. Young and other members of U.S. House and Senate are facing hostile crowds in public forums during their congressional break, with questions about “defunding” Planned Parenthood and the future of ObamaCare.

“I am for making sure that we are deliberate and we are thoughtful and we continue to have a civil discussion here today if we really want to talk about this,” Young said.

Young sent a tweet after the forum. Young posted a photo of himself talking to a woman at the front of a long line of people waiting to get in — saying he was “greeting my bosses with a welcome and a handshake.” Senator Chuck Grassley tweeted yesterday that more than 140 people turned out for his town-hall meeting in Charles City.