You are here: Home / Education / Regents hear information on proposed room and board rate increases 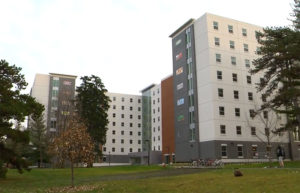 The Board of Regents held the first reading Thursday of proposed increases in room and board rates at the three state universities.

Brad Berg of the Regents staff says the schools base their charges on the cost of operation.”I’d like to point out that the systems are 100 percent self-supporting, so not only are they responsible for their own operating costs, they are responsible for all their capital costs as well,” Berg says.

Berg says the increases being requested are some of the smallest they have seen and says that’s been helped by schools working together. He says the universities responded to the board’s comments and got together and created a combined prime food contract that created efficiencies and savings that resulted in a very low average rate increase.

Representatives of each school spoke to the Regents Thursday at the meeting in Ames about the various things they are doing to manage the food and board costs.

University of Iowa vice president for student life Von Stange says they’ve been able to keep many of their costs lower. “We have no increase in utility costs. Secondly we are going to see some potential reductions in costs in HR and shared services as a result of Tier Initiatives,” Stange says. Stange says they are constantly trying to make the residence system meet the needs of students. “We did meet with our students, they were very supportive of probably the lowest increase we’ve ever had since I have been here,” Stange says.

The director of the residence system at UNI, Glenn Gray, talked about his school. “UNI’s proposed rate increase for next year is a combined 1.8 percent for the standard double room with full board. That’s the lowest rate increase we’ve had in over a decade,” Gray says.

ISU director of residence, Peter Englin, says they are seeing savings from the food contract. He says the savings right now is forecast at $350,000 in reduced food costs. “If we compare the first six months of fiscal year 16 to fiscal year 17, our food costs have gone from 29.13 percent down to 26.71 percent and our labor costs have gone from 35.81percent to 34.22 percent,” Englin says.

Englin says they also meet regularly with students to talk about ways to improve the service.”Some of the things that we are doing in conversation with students about creating some efficiencies and reducing expenses, they are paying off. So we are excited to see that,” Englin says.

The most common room and board plan at U-I would cost $10,015, it would cost $8,517 at ISU and $8,629 at UNI. The Board of Regents will hold a second reading and vote on approval of the increases at their meeting in April.

Here’s more information on the proposed room and board rates for each school: Residence System Rates PDF