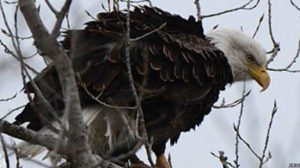 A central Iowa man has been cited in connection with the death of a bald eagle discovered last month in Yellow Banks County Park, on the southeast side of Des Moines.

Nate Anderson, a conservation officer with the Iowa Department of Natural Resources, says 27-year-old Mitchell Hoyt of Runnells was found to be in possession of the bird’s head and talons.

“A concerned citizen called and let me know that an individual was showing off an eagle,” Anderson said. “When I went to go visit with the gentleman, it did appear to be the same eagle that was dumped at Yellow Bank.” Remains of the eagle, which had been shot, were discovered by a hiker in the park on January 25. According to Anderson, Hoyt found the eagle’s head and talons later — in a different location.

“I’m convinced (Hoyt) is not responsible for the death of the eagle…he found (the eagle remains) along the side of the road where somebody else had dumped it,” Anderson said. Hoyt was issued a citation for illegal possession of a protected nongame animal. He pleaded guilty in Polk County Court and paid a $195 fine. Anderson said he’s “still following leads” in the case and still hopes to find the person or persons who killed the eagle.

Bald eagles have been a state and federally protected species since 1940. Those caught killing an eagle can face one year in prison and a $5,000 fine.