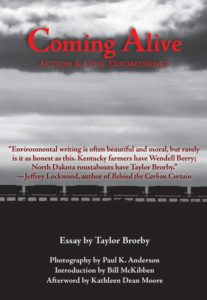 As legal battles continue trying to block the Dakota Access oil pipeline from starting operations, an Iowa-based author is releasing a book on his personal battles with the situation.

Taylor Brorby, of Ames, titled the 60-page book “Coming Alive” and says it’s a call to action from someone who’s very familiar with both sides of the divisive argument.

“I’m originally from western North Dakota and my whole upbringing was supported by lignite coal,” Brorby says. “This is really an essay that explores my own family’s inheritance through the fossil fuel industry and really what it took for me to ‘come alive’ and realize what the true cost of that is.”

The book covers the fight against the Bakken pipeline and other related issues of conservation, home and the environment.

“I have a moral responsibility as a fossil fuel child to bite the hand that fed me,” Brorby says. “I’m not proud that my family has made its money by unmaking the planet. I think, just because you’re a part of something, doesn’t mean you have to buy into the status quo of what that system promotes.”

In writing the book, Brorby says he’s trying to be a role model in demonstrating how we can all learn to take a stand.

“Both parents worked in the coal industry as well as my grandfather and numerous uncles,” Brorby says. “Before the oil boom, North Dakota was really known as an energy producer for lignite coal, which it is, but the oil boom really took over energy production in the state. No one directly in my family has worked in oil but we’ve made our money through coal.”

The book is being published by the North Liberty-based Ice Cube Press.