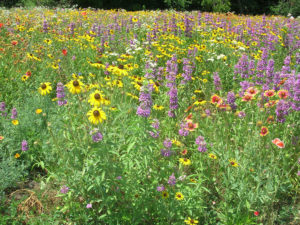 Iowa’s second largest city is planning to convert over 1,000 acres of land to wildflowers and prairie grasses, in an effort boost the population of pollinators, such as the honeybee.

“Most of the native habitat for pollinators and a lot of other species has been lost,” Gibbins said. “We wanted to have an initiative that didn’t just show people the way to do things that are beneficial environmentally, we really wanted to do it in large quantities to really help solve this problem.”

Entomologists blame the loss of honeybees, monarch butterflies, and other critical pollinators on various pesticides and climate change. The project in Cedar Rapids will begin in the spring with the seeding of 188 acres of unused public land, including park corners, golf courses, sewage ditches, water retention basins, and roadway medians.

“One of the neat things about this initiative is that it’s outside of city or county budgets,” Gibbins said. “We’re looking at grants and private donations, especially through help from the Monarch Research Foundation nonprofit, which is raising private money for us.” The State of Iowa allocated over $180,000 to help launch the project, which carries a total price tag of nearly $1 million.

“You can envision about $1,000 per acre to convert over to prairie,” Gibbins said. “We have developed our own seed mix and it’s rich in wildflowers. It’s really blended so the grasses don’t choke out the wildflowers after a number of years.” The initiative is projected to be completed over the course of five years.