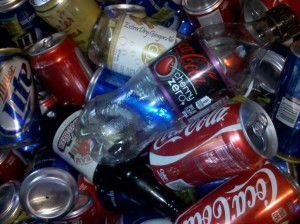 Republicans in the Iowa House are considering the repeal of Iowa’s “bottle bill.” Grocers have long complained that filth comes into their stores along with the empties they must accept from customers who want their nickel deposits back.

On Tuesday morning, the House Environmental Protection Committee will consider junking the “bottle bill” and having Iowans recycle empty pop and beer containers at the curb. Thirty-nine years ago, then-Governor Robert Ray and Terry Branstad, who was a state legislator at the time, backed the “bottle bill” as a way to reduce roadside litter. Mick Barry, president of Mid-America Recycling, says Iowa now is among the top five states in the country for recycling.

“This is something Iowans like — 84 percent of people in the state of Iowa support the ‘Bottle Bill’ today,” Barry says.

Supporters of getting rid of the “Bottle Bill” say the empties in the grocery stores are a health hazard, plus curbside programs could profit from having more aluminum, plastic and glass containers to sell. Barry points to data indicating curbside recycling is less effective.

And Barry says due to Iowa’s “Bottle Bill,” nearly nine of every 10 aluminum soda and beer cans are recycled in Iowa, along with the vast majority of glass and plastic beverage containers.

The bill House Republicans are considering would no longer have consumers pay and then redeem a nickel deposit fee on containers with carbonated or alcoholic beverages. Instead, a new tax would be imposed on beer and pop containers. That one-cent-per-container tax would go into a new state-run fund to finance recycling programs. In addition, the state would impose a tiny tax on all beverages sold in the state, to raise money for the Keep Iowa Beautiful fund.