You are here: Home / Sports / Late free throws lift Cascade past Central Decatur in 2A 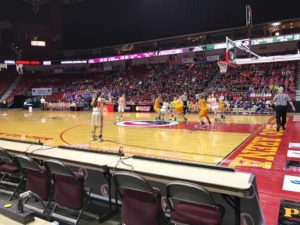 Cascade made three free throws in the final 12 seconds of the game to edge Central Decatur 59-56 in a class 2A quarterfinal round game. Cougar freshman Nicole McDermott finished with a game high 18 points and connected on a pair of free throws with five seconds remaining.

“I lost one of my contacts and I went into the locker room and didn’t have one”, said McDermott. “There was paint chip on the rim and I was able to use that as my aiming point.”

Cascade trailed by eight points in the third quarter but turned the game around with a 17-0 run.

“We made some plays to get back into it and I was proud of us for doing that”, said Central Decatur coach Curtis Boothe. “But I thought that was a big swing for them.”

Raegan Boothe led Central Decatur with 16 points and Lily Simon Added 15. The loss was the first for the Cardinals who close out the season with a record of 24-1.

Cascade (23-2) advances to play No. 2 Treynor in Thursday’s class 2A semifinal round. The other semifinal game will match No. 1 Iowa City Regina against Western Christian.