You are here: Home / Education / Apollo astronauts on new mission in Iowa: to educate (AUDIO) 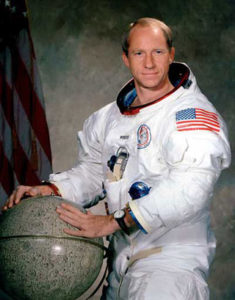 Only 24 men have flown to the Moon — all of them Americans — and two of them are in central Iowa this week, trying to inspire college students to look skyward.

The 85-year-old Worden, who flew on Apollo 15, says he’s optimistic about where the nation is headed. “The future for manned spaceflight is very bright right now,” Worden says. “I would encourage any young people who have that in their sights for the future to really pursue that hard because I think we’re going to see a very, very expanded space program.”

Worden says it’s now his mission to help the next generation to comprehend the huge challenges NASA overcame decades ago, and the challenges that still lie ahead.

In an interview with Radio Iowa, Worden was asked if today’s tech-savvy students are more interested in developing apps that in becoming astronauts. 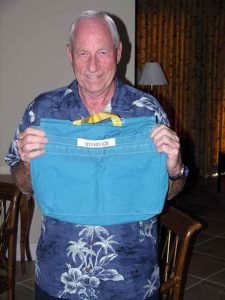 “It all depends on who I’m talking to,” Worden says. “If I’m talking to elementary and high school kids, they want to be astronauts. If I’m talking to college kids, a lot of them are more into apps but it’s interesting. If I go somewhere and give a talk, the interest is all on astronauts and space. I think everyone really sees the value in the space program.”

Some of the world’s greatest innovations came from the space race. Thousands of products, from microchips to microwave ovens, are linked to the imagination and science required to put a man on the Moon.

Many college freshmen only know about the Nine Eleven attacks from what they’ve seen on YouTube, so the Apollo program may seem more like ancient history. Worden admits, many students simply don’t know about America’s incredible accomplishments with the Moon landings of the late 1960s and early ’70s.

“No, I don’t think they do,” Worden says. “I think with the educational system we have in this country, we have begun to downplay the value of the space program because there are other things more important to the people who are trying to teach our kids.”

NASA is still sending astronauts into orbit, but they’re getting there aboard Russian spacecraft, as America retired its space shuttle fleet in 2011. Iowa native astronaut Peggy Whitson is currently onboard the International Space Station for a six-month mission. While some believe our nation’s taken many steps back with its space program, Worden says the time is quickly coming for more giant leaps forward.

“There has been a lot of downplaying of the space program over the past 20-30 years and that has resulted in not a lot of emphasis on the part of the government toward the space program,” Worden says. “Our last president was not a fan and chopped the money out from under NASA and so we’re struggling to get things done. I think now with Trump in office, we’re going to see that turn around.” 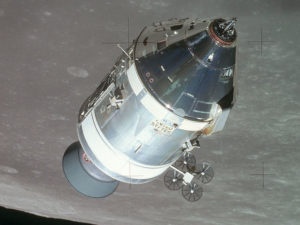 “I’d be kind of nervous about it, but at the same time, Elon Musk has said what he’s going to do and then he’s gone ahead and done it,” Worden says. “I would never, never cut him short. If he says he’s going to do something, he’s probably going to do it.” Worden was command module pilot on the three-man Apollo 15 crew in 1971, during which he took the first “deep space lunar walk.”

On that mission, Worden became, “the most isolated human ever,” according to the Guinness Book of World Records, as at times his fellow astronauts were 2,235 miles away on the lunar surface while he orbited above in the capsule.

Worden will speak on DMACC’s West Des Moines campus tomorrow at 11:30 AM, while Ken Mattingly, who flew on Apollo 16 and two space shuttle missions, is there today.

Hear the full interview with Worden below.