You are here: Home / Sports / Defense leads No. 1 Marion over Boone 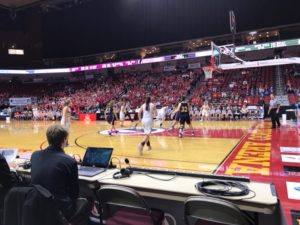 Top ranked Marion had to rely on defense to grind out a win over upset minded Boone. The Indians allowedonly two points in the first quarter and just six in the fourth in a 46-38 victory in a class 4A quarterfinal round game.

Freshman Kayba Laube who led Marion with 17 points. The Indians never trailed but could never take control of the game until the waning moments.

“We really focus on defense at practice”, said Laube. “Our goal is to lock them down as much as we can on defense and build a cushion on offense.”

Junior guard Caitlynne Shadle led Boone with 21 points but two dry spells doomed the Toreadors. That went the first 11 minutes and 53 seconds of the game without a field goal and were held scoreless the first 5:03 of the final quarter.

“We are very proud of the way we showed out there and our performance”, said Shadle. “If we could have just cleaned up that first quarter it may have been a different story.”

Boone was making its first appearance at the tournament since 1989 and Shadle says it was an experience she will never forget.

“The town of Boone was just elated that we made it and gave us huge support.”