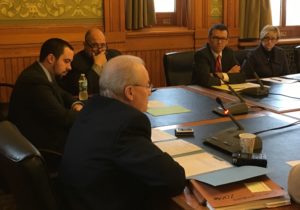 Legislators who support medical marijuana are rushing to advance a bill that would at least extend the soon-to-expire state law that has decriminalized possession of cannabis oil for treatment of chronic epilepsy. Senator Joe Bolkcom, a Democrat from Iowa City, supports the bill, but says it’s only a “half step.”

“This bill is inadequate,” Bolkcom said this morning. “It leaves thousands of other Iowans who have petitioned us for the last four years out in the cold.”

Iowans with chronic and incurable diseases have been coming to the capitol, lobbying legislators to extend the law so they can use cannabis oil as treatment for nausea, pain and sleeplessness. But none of those advocates attended today’s  early morning meeting on this scaled back bill. Senator Thomas Greene, a Republican from Burlington, said he understands their frustration and disappointment.

“But as I’ve discovered here in my first seven weeks, things don’t move as quickly as we would like, but I think things will happen,” Green said. “There’s a need. There’s an urgency.”

Greene is a retired pharmacist and he has two relatives who would benefit if doctors could prescribe cannabis oil as treatment.

“People with these medical issues are very real. It’s not something that’s one percent or two percent. It’s a growing number,” Greene said. “…We have to realize that medical treatment modes change over time and I’ve seen it in my 40 years in pharmacy. Advances…in therapy change every year — every day, so we have to be receptive to that, understanding and compassionate to those who need our help.”

Greene said a growing number of Iowans support allowing doctors to prescribe the oil extract from a marijuana plant as treatment for a variety of illnesses. Green said he believes a “combined voice from medical professionals” eventually will help convince his fellow legislators to take that step.

This issue is part of the frantic activity at the statehouse this week as lawmakers rush to meet Friday’s deadline for action on policy bills. Bills that fail to win approval in a committee are dead for the year.