You are here: Home / Fires/Accidents/Disasters / No charges in Pella Walmart crash 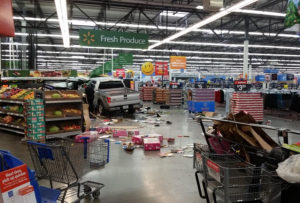 Three people died and one was injured when this truck crashed into the Pella Walmart store.

The man who drove a pickup through the entrance of a Walmart in Pella, killing three people, will not face charges. Marion County Attorney Ed Bull made the decision not to file charges, saying there’s no evidence 66-year-old Dennis Mockenhaupt’s actions were intentional or reckless.

Investigators said the Knoxville man had a medical condition that caused him to briefly lose consciousness, leading to the crash on December 1. Bull said toxicology tests found neither alcohol, nor drugs — legal or illegal, were a contributing factor in the accident.

A shopper, 76-year-old Ruth DeJong of Pella, was killed, along with two Walmart employees; 31-year-old Carrie Zugg of Leighton and 29-year-old Lindsey Rietveld of Bussey.