You are here: Home / Business / ‘Workers comp’ overhaul up for debate in committees today (AUDIO) 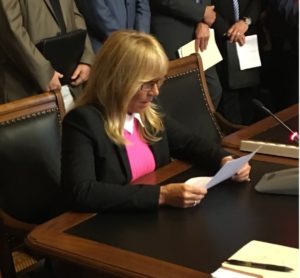 A bill on the fast track in the Republican-led Iowa legislature would change the system that outlines how Iowa workers are compensated when they’re injured on the job. Business groups say workers compensation premiums are increasing “significantly” and they’re urging lawmakers to act. Iowa Motor Truck Association president Brenda Neville said Iowa Supreme Court decisions and new regulations over the past few years have “set the system back.”

“Unfortunately, too many of my members feel that the payments are not going to the injured worker,” Neville said during a subcommittee hearing on the bill Wednesday, “…but, instead, they feel as if the attorneys are getting a lot of those fees.”

Unions and lawyers who represent injured workers are adamantly opposed to the bill. Charlie Wishman of the Iowa Federation of Labor said the bill will “radically…tilt” Iowa’s workers compensation system “in favor of business and industry.”

“From our analysis, there is not one single line or sentence drafted in this bill that helps workers injured on the job,” Wishman said. 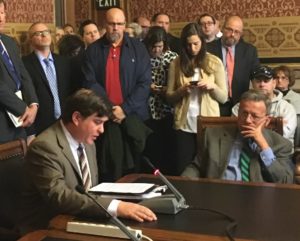 Iowa Chamber Alliance president John Stineman said the “cash benefits” paid through Iowa’s workers compensation system are higher than any neighboring state’s, “at least two of which were twice as much and so we believe it’s time for a fix.”

Morgan Miller of the AFSCME union pointed to the part of the bill that will cut off payments for disabling workplace injuries when a person turns 67. She called it age discrimination.

“My grandpa was a custodian all his life and his retirement plan was to work until he was 70 years old and he was able to do that,” Miller said. “It just worries me personally what this bill could do to someone like that and I think many Iowans are in that situation.”

The bill cleared subcommittees yesterday and is scheduled for debate in committees in both the House and Senate today.

AUDIO of House subcommittee meeting on the bill, 64:00