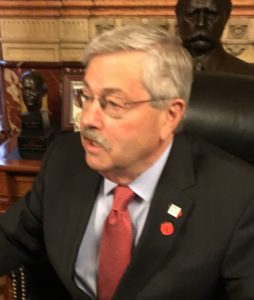 Governor Terry Branstad may resign as soon as the last week in April in order to serve as President Trump’s ambassador to China.

Branstad expects a U.S. Senate confirmation hearing on his nomination to happen about five weeks from now. Branstad was in Washington, D.C. last weekend and through the beginning of this week for a National Governors Association meeting. He also met with Trump Administration officials to talk about his hearing before the Senate Foreign Relations Committee.

“I spent about three hours with the state department, with some of their staff and, basically, they indicated to me it’ll probably be around the first week in April when I’ll come up,” Branstad said Thursday during an interview with Radio Iowa and The Cedar Rapids Gazette.

The governor will be flying back to DC “a few more” times this month to meet personally with each member of the committee. During one of those trips, Branstad expects to be put through what’s called the “murder board.” It’s a state department drill to simulate what may happen at the confirmation hearing.

“Ask you the tough questions,” Branstad said in describing the exercise. “See how you handle it. Give you advice.”

Branstad said he’s gone through the same kind of preparation for press conferences and campaign debates. Branstad has a good guess now about when his nomination to be ambassador will be voted upon by the full U.S. Senate.

“I’m thinking it’s going to be late April, maybe early May,” Branstad said. “But as soon as I am confirmed, then shortly thereafter it would be my intention to resign and be sworn in as the ambassador and then the lieutenant governor would, of course, become the governor.”

Branstad sat next to First Lady Melania Trump and the governor’s wife, Chris, sat next to President Trump at the dinner the Trump’s hosted at the White House Sunday night for the nation’s governors.