You are here: Home / Business / Study: Iowa sees 61% boost in the number of solar jobs 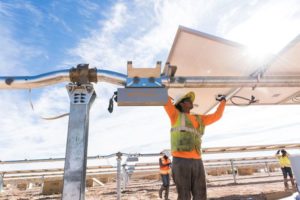 A report called the Solar Jobs Census finds the number of people working in the solar industry in Iowa rose just over 60% in the past two years.

Avery Palmer, spokesman for the non-profit Solar Foundation, says Iowa had about 350 solar jobs in 2015 versus more than 560 last year. The study finds one out of every 50 new jobs in the country last year was in the solar industry.

Palmer says, “What we’re seeing over and over is that the price of solar is going way down and solar is becoming more and more affordable and accessible no matter what part of the country you live in, whether you’re in a small town a big city or a rural area.”

The census finds solar employment increased in 44 of the 50 states last year, growing by 25% nationwide, while Iowa’s increase was 61%.

“As solar becomes more attractive to homes, businesses and communities, companies are building more projects,” Palmer says, “and they are hiring more people to do the work.”

The subject of solar jobs is wide-ranging, Palmer says, and includes far more than the people who install solar arrays on rooftops.

“If you have a big solar project that’s being built out somewhere in the country, you need folks to manage the project and to manage the finances,” Palmer says. “You also need people to do sales, to do the marketing, to do the engineering.”

Palmer predicts steady growth, with an increase of at least 10% in solar jobs nationwide in 2017. California saw the most growth in solar jobs in 2016, followed by Massachusetts, Texas, Nevada and Florida.

Iowa ranks 41st nationally for the number of solar jobs, 38th in solar jobs per capita.