You are here: Home / News / Branstad still pushing to cut number of regulated professions in Iowa 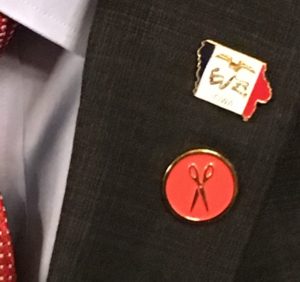 Governor Terry Branstad says he’s not surprised his fellow Republicans in the legislature have been reluctant to embrace his regulatory reduction plans.

“We knew this was going to be tough,” Branstad says. “You’re going up against all of the organized special-interest groups that want to protect their turf, but I’m still hopeful that we can get parts of it approved.”

Branstad’s bill that would have ended state licensing for barbershops, social workers, mental health counselors and other health care professionals was rejected by a three-member House panel. Republican Representative Bobby Kaufmann of Wilton suggested the move could “harm the public” by inviting pretenders into the state who would act as if they had legitimate training in the health care field.

Branstad says there are too many state-licensed professions in Iowa.

“These licensing boards kind of look at it as something (like), ‘We’re there to protect the profession, not the public,’ and that’s my concern,” Branstad says. “In some cases we’ve gone into places where I really don’t think we need to be licensed and it drives up the costs and it keeps out the competition.”

Another proposal Branstad backed tried to change state regulations to make it easier for health care clinics that are for-profit to set up shop near already existing Iowa hospitals and clinics. That bill failed to advance in the Iowa House, too, because of opposition from Republicans. Branstad says these kinds of regulatory reforms will “never be easy” to get through the legislature.

“Every one of these groups is organized. A lot of ’em have lobbyists and they spend a lot of money and they always sell it on the idea, ‘Well, we’re going to protect the health, safety and well-being of Iowans,'” Branstad says. “But we have more licensed, regulated professions than anybody else.”

Branstad made his comments late Thursday during an interview with reporters from the Radio Iowa and The Cedar Rapids Gazette. Branstad was wearing a red lapel pin at the time. Kentucky’s Republican governor, Matt Bevin, gave Branstad the pin, which featured a tiny pair of scissors. It’s a symbol of the Kentucky governor’s “red tape reduction” campaign.