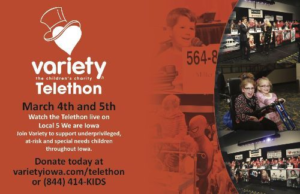 The 43rd annual Variety Telethon will get underway tonight to benefit at-risk and special needs children across Iowa.

Spokeswoman Megan Grandgeorge says the telethon is the main fundraiser for the children’s charity and there’s a great lineup for this year’s event.

“We have all sorts of celebrities from Miss World to an Iowa favorite, Sarah Darling, and everything in between,” Grandgeorge says, “wonderful singers and entertainers.”

Iowa native singer Carrie McDowell will return to the telethon stage along with actress Emma Samms from “General Hospital” and “Dynasty.”

“A lot of that money is used for our grant program,” she says. “We also have a bike program which awards traditional bikes, locks and helmets to kids and also specialized adaptive bikes to special needs kids. We have a van program that provides transportation for groups like Boys and Girls Clubs, taking kids out of their neighborhoods so they can really experience their city.”

The Variety Telethon will be broadcast from 7 PM until midnight tonight and from 7 AM until 6 PM Sunday on Channel 5 in central Iowa. You can also watch the show streaming live at www.varietyiowa.com.