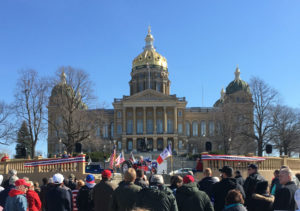 A series of “March 4 Trump” rallies were held across the country on Saturday, March 4th — including four in Iowa. Gary Leffler of West Des Moines greeted the crowd gathered outside the state capitol.

“You watch the news and you see the other guys and they’re just protesting all the time,” he said. “But I’ll tell you what: we’re here to stand up for something that’s great and something that’s good and see that our country has hope again and thank God for Donald J. Trump being the 45th president of the United States.” 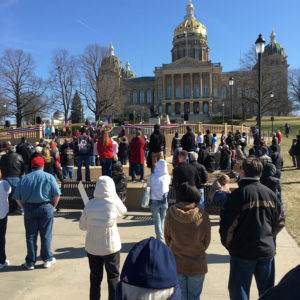 Supporters of President Trump turned out at the Iowa State Capitol.

Senator Brad Zaun of Urbandale was the only elected official in Iowa to endorse Trump before the Iowa Caucuses and he told the crowd he’s “excited about what’s happening in the White House.”

“Now when old Senator Barack Obama became president, I didn’t like it. I didn’t like the policies he did, but I’ll tell you what — I wasn’t out screaming and raising heck everywhere and being disrespectful and I have never seen it as bad as it is right now,” Zaun said. “…It is a culture war that we’re going through and it is time we take back the state of Iowa and America and you guys are all doing it. Thank you!”

Dave McNair of Newton also spoke at the rally. He owns the printing business in Newton featured in the “60 Minutes” story Trump saw in 2010. Trump called the next morning to arrange contracts for McNair at the Trump Tower in Chicago.

The Iowa Democratic Party chairman Derek Eadon issued a written statement in response to the rallies, saying ” a new scandal emerges…almost daily” from the Trump Administration that should raise Iowans’ doubts about Trump’s “ability to lead.