You are here: Home / Agriculture / Branstad: no truth to rumors Trump will alter RFS (AUDIO) 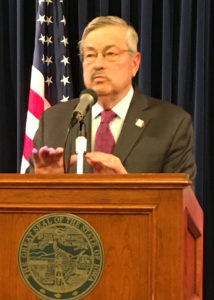 “It’s not going to happen,” Branstad said. “I’ve been assured about that by a lot of people…We are pleased with that.”

News media reports have indicated a prominent billionaire who owns an oil refinery — and is an unpaid policy advisor to President Trump — is pushing a change in biofuels policy that refiners have long sought. According to Branstad, Trump has sent “a very clear message” that he’s supporting the ethanol industry and will not adopt the change.

“I know the rumors and I know who is involved in it and I can tell you they’re not true,” Branstad told reporters this morning. “They’re not true…My son, Eric, as you know, is out in D.C. and I’ve talked to him about it and he has assured me it’s not going to happen.”

Eric Branstad, the state director for Trump’s presidential campaign, is now a White House liason in the U.S. Commerce Department. The proposed change would not alter the requirement that ethanol be blended into gasoline. Instead, it would who is required to do it. Governor Branstad said the change being proposed would be impractical.

“Right now the requirement is on the distributors and this would change it to the retailers,” Branstad said. “…It would be much more difficult to enforce the Renewable Fuels Standards if you had to deal with all the retailers in the nation rather than the people that are distributing the fuel. That’s the reason why, practically, it doesn’t make sense and that’s the reason why it was shot down real quick when the rumor surfaced.”

Branstad made his comments this morning, during his weekly news conference.