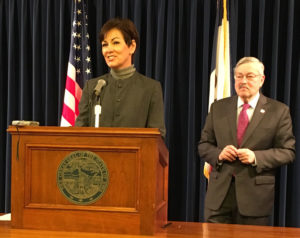 Lieutenant Governor Kim Reynolds suggests interested Iowans should “stay tuned” for information about the transfer of power in the governor’s office.

“It will be a seamless transition,” Reynolds said this morning during a news conference in the governor’s office. “…Right now, we don’t know what that timeline is.”

Governor Branstad indicated late last week his U.S. Senate confirmation hearing to serve as U.S. Ambassador to China may happen the first week of April, meaning he may be resigning as soon as late April or perhaps early May if the full U.S. Senate quickly votes to confirm him for this new role. Once Branstad resigns and Reynolds takes the oath of office, she plans to name a new lieutenant governor. Reynolds, though, is keeping her list of candidates for that job secret at this time.

“There’s going to be plenty of time for me to lay out what my objectives are, but right now we’re focused on the work that’s at hand,” Reynolds said. “We’re focused on working with legislators to wrap up this legislation session.”

Branstad told reporters this morning he has not made suggestions to Reynolds as to people she might pick as her lieutenant governor.

“First of all, it’s her choice,” Brantad said. “I have great trust in her judgment.”

The timetable lawmakers and Branstad have laid out indicates the 2016 legislative session will conclude before Branstad resigns and leaves for China.