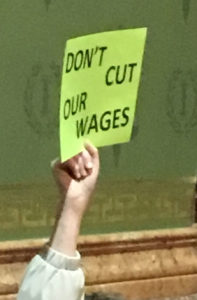 Business interests are urging Republicans to nullify local ordinances that have raised the minimum wage in Johnson, Linn, Polk and Wapello Counties.

Critics say the move will reduce pay for as many as 85,000 minimum wage workers in those four counties. Mike Holms is manager of Jethro’s, a locally-owned chain with seven restaurants in the Des Moines metro. He testified earlier tonight at a public hearing at the statehouse.

“It creates an incredibly unfair playing field and confuses the prospective employees expectations in damaging ways,” Beck said. “It’s hard enough to compete in today’s market with your competitors, but imagine competing with yourself when you have businesses in multiple districts with differing wage requirements.”

Patrick Stall, an Iowa Citizens for Community Improvement member from Des Moines, says Republicans will make life harder for minimum wage workers in places where the LOCAL base wage is going up.

“We are in a class war and right now the rich and their scumbag Republican friends are winning,” Stall said. “We need to remember this day and stand up and back fight tomorrow.”

Josh Myatt, an Iowa State University student from Burlington, is president of the Young Democratic Socialists on campus.

“Republicans claim to support small government,” Myatt said. “How is taking the ability of raising the minimum wage to a living wage from counties and cities supporting small government?”

“People of faith actually fast from using things like plastic bags or drinking straws because of the detrimental effect these and other materials have on God’s creation,” Abrahamson said.