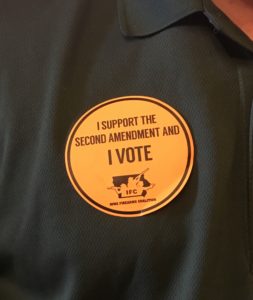 “The fact that we have a day that we scheduled months out in advance, to have them essentially tailor their schedule to ours is almost unheard of,” Liske said this morning. “…The fact that they’re doing this is a real testament to you guys…the fact that you’re out there helping with campaign work, things like that.”

More than 70 members of the Iowa Firearms Coalition crowded into a capitol committee room this morning for a briefing on the bill. Members wore orange stickers that read: “I support the Second Amendment and I vote.”

Representative Matt Windschitl, a Republican from Missouri Valley who is floor manager of the gun bill, spoke to the group.

“A lot of things in this bill, including the ‘stand your ground’ provisions, have been a long time coming,” Windschitl said, “and it looks as though we’ve finally got an opportunity to push this down to the governor’s desk.”

Windschitl is a trained gunsmith and his family runs a gun store in Missouri Valley. He uses the word “phenomenal” to describe the bill as currently crafted.

“With the make-up of the legislature the way it is, we have gotten this bill to a place where I didn’t even expect us to as far as the freedoms we have in here,” Windschitl said. “…This sets us up for future successes. This sets us up so we can come back next year and get our freedoms back that have been encroached upon over generations.”

Windschitl, who has received death threats because of his advocacy for the legislation, said there’s some “hate and discontent out there” about the bill. He urged Iowa Firearms Coalition members to lobby their Senators today.

“We’ve still got our work cut out for us when we move this over to the senate,” Windschitl said. “There are a lot of senators that are very eager to get all of this done, but the majority in the senate is new and so some of them have not faced the challenges that go into running bills like this, because they can get kind of controversial.”

House debate of the bill is expected to get underway early this afternoon.