You are here: Home / News / Senator Grassley calls on FBI director for answers about spies, Russians 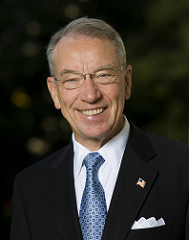 Iowa Senator Chuck Grassley is asking the FBI for information about allegations the bureau was ordered by the Obama administration to investigate then-candidate Donald Trump during last year’s presidential campaign.

Grassley, a Republican who chairs the Senate Judiciary Committee, says one of his colleagues talked briefly with FBI director James Comey on Monday.

The allegations include a report that the FBI may’ve tried to hire a former British spy, Christopher Steele, to investigate Trump. Grassley says Steele is the man who authored a report alleging ties between Trump and the Russians.

Grassley says he and others on his panel have a raft of questions for Comey that deserve answers.

“We want this briefing and it can either be secure or it can be open, whatever we have to do under our national security laws to get the information,” Grassley says. “We want an update on the investigation in regard to Russia and all that stuff.”

Grassley has sent a letter to Comey that states:

The idea that the FBI and associates of the Clinton campaign would pay Mr. Steele to investigate the Republican nominee for President in the run-up to the election raises substantial questions about the FBI’s independence from politics, as well as the Obama administration’s use of law enforcement and intelligence agencies for political ends.

Last weekend, President Trump alleged in a tweet that the Obama administration tapped the phones at Trump Towers during the campaign, but offered no evidence.