You are here: Home / News / State asks for input on how to spend Volkswagen settlement dollars 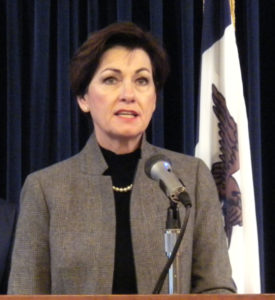 The State of Iowa is receiving $21 million dollars from Volkswagen after the automaker admitted to falsifying emissions data.

Lieutenant Governor Kim Reynolds says Iowa’s share of the $15 billion settlement will be directed at projects that reduce emissions from agriculture, manufacturing, or burning fossil fuels.

“This funding has the potential to significantly and positively impact air quality in Iowa,” Reynolds said. The Iowa Department of Transportation will be taking suggestions from the public on projects to repower or replace older diesel engines to reduce the emission of nitrogen oxides. On Monday, Reynolds outlined the project and said all details can be found on the Iowa DOT’s website.

“We encourage you to take some time to explore the website. It contains detailed information on the types of projects that would be eligible for consideration under the settlement,” Reynolds said. A federal judge approved the settlement between Volkswagen and state and federal governments last year. The carmaker sold nearly 600,000 diesel vehicles with model years 2009 to 2016 equipped with so-called “defeat devices” to get around emissions standards.

Iowa DOT interim director Mark Lowe says Iowa’s share of the settlement was based on how many of the vehicles were sold here.

“And if you go to the settlement documents themselves, posted on our website, they may reflect that information,” Lowe said. The $21 million coming to Iowa will be distributed over a 10 year period. The settlement was also designed to compensate owners of the V-W vehicles in question, with payments ranging from $5,100 up to $10,000.