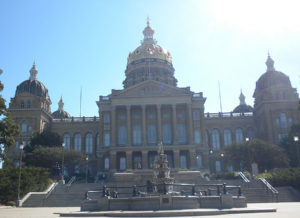 Employers, employees, doctors and lawyers testified tonight at a public hearing at the state capitol, quarreling over a bill that would change Iowa’s workers compensation system.

Steve Stouffer, president of Tyson Fresh Meats, said the system is “being played” by lawyers. “It’s become more of what I would call a ‘litigious lottery,'” Stouffer told legislators.

Workers’ advocates say the bill GOP lawmakers have proposed skews the system so it will “biased” against injured workers.

“These folks are real people. They’re not robots. You can’t just put a little grease in there and they’re o.k.,” said Kelli Harrison, a regional representative for the UAW.

Paul Gregoire of Emerson/Fisher Controls in Marshalltown said the workers comp system is “out of balance” and becoming a drag on Iowa’s economy.

“What we’re doing is we’re pushing companies either away from the state who might locate here or getting companies to not expand like we like to up in Marshalltown for those kinds of reasons,” Gregoire said.

John Kuhnlein, a doctor from Ankeny who is an occupational specialist, suggested the bill is “inherently unfair” and will shift costs from the employer to taxpayers who’ll have to pick up the tab.

“These injuries will not go away,” Kuhnlein said. “When a claim is denied, as these bills make it easier to do and with little penalty for being wrong, these individual will still need medical care.”

Scott Folkers, the vice president and general counsel for Winnebago Industries, said workers comp in Iowa has become an “out of control locomotive.”

“That has led to progressively larger indemnity awards for injured workers,” Folkers said. “That puts more money in the system, which attracts more attorneys.”

“Iowa’s work comp system should not be at the mercy of the ever-changing political winds,” Taylor said during the 90-minute forum.

The bill is a priority for Governor Branstad and Republican who now control the debate agenda in the Iowa House and Senate. Branstad says recent court rulings and regulations have thrown the workers comp system out of whack.