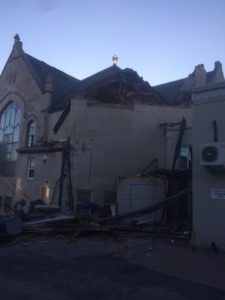 Some property in Muscatine and Muscatine County was heavily damaged Monday night during severe storms that swept through eastern Iowa.

They hit about 10 p.m. and damaged buildings, knocked down power lines and kept crews working throughout the night.

Among the structures most damaged was Wesley United Methodist Church in Muscatine.

The Weather Service will be visiting Muscatine today to do a damage assessment and determine if the destruction resulted from a tornado or straight-line winds.

Elsewhere in Iowa, as many as four tornadoes touched down in the state during the storms, bringing reports of scattered damage, heavy rain and large hail. 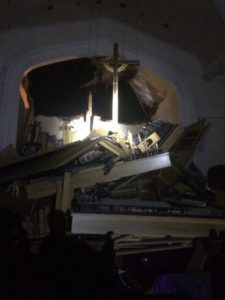 In Webster City, clean-up is underway after that north-central Iowa community was hit by very strong winds about 6 PM on Monday.

Webster City city manager Daniel Ortiz Hernandez says many homes were without power for much of the night.

“A lot of people heard the tornado sirens going off. We don’t have any confirmation of a tornado touching down but we did have strong winds that toppled a lot of trees,” Hernandez says. “We had roads that were blocked by trees, we had power lines that were down, we had fires that were started by downed power lines on trees, so it was a very busy night.”

The top wind speed measured at the Webster City municipal airport was 69 miles per hour.

The town of Belle Plaine reported wind gusts of 90 miles an hour.