You are here: Home / News / Reynolds says Iowa income taxes have to be simplified 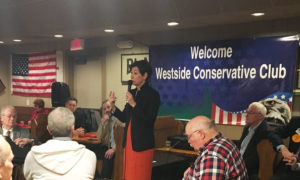 Iowa’s next governor is reviewing different ways to make Iowa’s income taxes “simpler and flatter,” but is not yet ready to reveal her preferred approach.

“There’s a lot of different scenarios that we’re looking at,” Lieutenant Governor Kim Reynolds told a crowd in suburban Des Moines this morning, “how we get the biggest bang for the buck, but have it impact all Iowans in a positive way and so we’re going to continue to run the numbers and you will see something with that. You will.”

Reynolds will take over as governor when Terry Branstad resigns to become ambassador to China. Reynolds said since lower-than-expected tax revenue has forced reductions in the state budget, now is not the time to make “comprehensive” changes to Iowa’s tax system, but she’s hinting 2018 may be the prime time.

“We have to do it,” she said, “because that’s what’s going to continue to make us competitive not only in the nation, but around the world.”

Shrinking the number of income tax brackets, cutting the corporate income tax rate and getting rid of the deduction for federal income taxes paid are all ideas being considered.

“I just had an individual tell me that his son, who’s in the military, is retiring in Texas because of their tax policy and it’s about a $6000 savings and he wants to come back to Iowa and so I told him to tell his son not to hang any pictures,” Reynolds said. “to not get too settled in, that we’re going to work to, hopefully, make Iowa more competitive.”

“I don’t know if we can get there, but by making it simpler and flatter is a really good place for us to start because, you know, we do have the federal deductability…but it’s too complex,” Reynolds said. “They’re not going to take the time to figure it out…so we need to have it be a bullet that says, screams: ‘We’re competitive and we want you to be here in the state.'”

Reynolds spoke early this morning to more than 100 people at the Westside Conservative Club in Urbandale. The first question from the crowd was about the timing of Branstad’s exit.