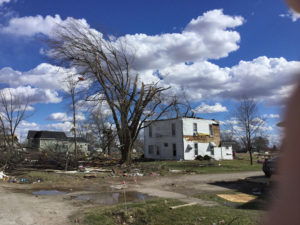 Damage to a home in Seymour.

At least 10 tornadoes touched down in Iowa Monday night, according to damage assessments completed by the National Weather Service offices in Des Moines and the Quad Cities.

Storm teams are still checking out other locations with damage, so the tornado total could rise. Meteorologist Andrew Ansorge says the most significant damage occurred in the south-central Iowa town of Seymour.

“There are quite a few homes damaged there, partial walls collapsed, roof structures damaged, and widespread tree damage. The school there also sustained major damage to its roof and walls,” Ansorge said. 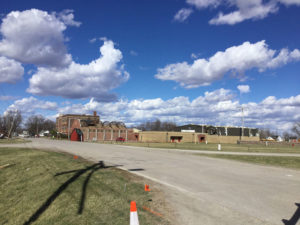 Two Seymour School gymnasiums are considered a total loss and several school buses were damaged as well. There are no reports of injuries in the small Wayne County town. The tornado, rated EF-2, was on the ground for 12 minutes.

“We estimated winds between 115 to 125 miles-per-hour,” Ansorge said. “While it hit Seymour, it started southwest of town and tracked northeast through town on a path of 12.6 miles, with a maximum width of 200 yards.” Another EF-2 tornado touched down on the south side of Centerville, damaging a manufacturing facility, several homes, and outbuildings.

“We again estimated that one with wind speeds of 115 to 125 miles-per-hour, a path length of just over eight miles, and a maximum width of 200 yards,” Ansorge said. The tornadoes in Seymour and Centerville struck between 8:15 and 8:45 Monday night. Four slightly weaker tornadoes touched down earlier in the evening in Marion and Webster counties.

“We had an EF-1 tornado (west of) Knoxville. That had winds between 90 and 100 miles-per-hour and just under a mile for its length. Another EF-1 tornado hit north of Knoxville with wind of 85 to 95 miles-per- hour and a-mile-and-a-half for length,” Ansorge said. “Another tornado was just south of Fort Dodge near Harcourt. That was an EF-0, so a fairly weak tornado, and we had another EF-0 near Dayton.”

The National Weather Service office in the Quad Cities, so far, has confirmed four tornadoes that touched down late Monday night. That included a pair of EF-2 twisters that tracked through Muscatine County – damaging homes, businesses, farm buildings, power poles, and trees.

In Muscatine, at least three people were injured, two homes lost their roofs, and up to 80 more homes sustained minor damage. Two weaker, EF-1 and EF-zero tornadoes struck areas of Dubuque, Cedar, and Clinton counties. A storm survey team is still reviewing damage from another likely tornado that traveled between Goose Lake and Dewitt.