You are here: Home / Sports / Gladbrook-Reinbeck and Grand View Christian will collide for 1A title 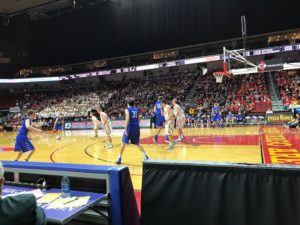 Gladbrook-Reinbeck opened the fourth quarter with an 8-0 run as the Rebels beat top-seeded North Linn 58-53 in a class 1A semifinal round game. Joe Smoldt had 19 points as the Rebels take a 26-2 record into Friday night’s championship game.

“Going into halftime they had a seven point lead but we had confidence in the room”, said Smoldt. “We knew we could make a run.”

Sophomore Jake Hilmer led North Linn with 20 points. The Lynx made only five of 28 shots in the second half and missed 12 of 13 to start the fourth quarter. North Linn falls to 26-1 and with no seniors on the roster the future is bright.

“It is kind of crazy”, said Hilmer. “As an eighth grader I came down here with my dad for the 1A semifinals and watched Joe Smoldt play and a couple of years later I am playing against him. I think we have a lot to look forward too and we will definitely be back.”

Grand View Christian will play for the school’s first state championship. The Thunder got 20 points from Stephen Glenn and used a late 11-0 run to beat Remsen St. Mary’s 45-36.

“It feels awesome”, said Glenn. “That is what we worked for all summer was to get back here. Hopefully we will win it.”

Remsen St. Mary’s connected on only 30 percent from the field, including 5-of-17 from three point range.