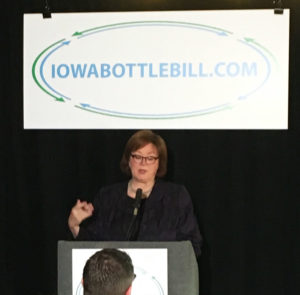 Supporters of Iowa’s “bottle bill” are pointing to new survey data indicating 88 percent of Iowa voters consider the deposit and redemption system for beer and pop containers is “good for the state.”

Last month, the grocery industry scored a small victory when a committee in the Iowa House narrowly embraced legislation that would repeal the “Bottle Bill.” Selzer says there’s greater support for putting the nickel depositt on more beverage containers.

“You’ll see that most commonly people see it.as needing to be expanded. By a two-to-one margin, 40 percent say, ‘Expand it,’ versus 20 percent who say, ‘Repeal it,'” Selzer says. “That’s a sign of the popularity of the bill.”

Selzer’s survey found 62 percent of Iowa voters either return their empties and redeem the deposit, or give the empties to someone else who collects the deposit money. Troy Willard owns and operates the “Can Shed” in Cedar Rapids, which handles and sorts more than 100 million beverage containers every year.

“I’m not surprised by the results of the poll. Our customers that come in every day tell us about it and, you know, they fear this might be repealed and what the consequences of that might be,” Willard says. “My hope is as we discuss the benefits and the popularity of the bill, we realize the potential to make it better.”

Eighteen percent of those surveyed said they put their empty beverage containers in a recycling bin. Representative Andy McKean, a Republican from Anamosa, is hoping to expand the “Bottle Bill” to apply the nickel deposit fee to more containers — and come up with a broader system so Iowans may easily find a place to redeem and recycle their empties.

“It would be my hope that this could spur economic development, could result in more profitable redemption centers,” McKean says, “and also take the burder off of our grocery stores that have been handling these cans and bottles these many years.”

Lawmakers and lobbyists who are seeking repeal of the “Bottle Bill” say it is likely legislative leaders will appoint a group of industry experts and legislators to study the issue this summer.