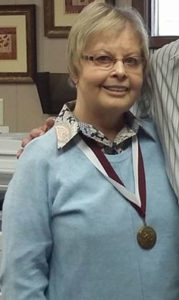 A north-central Iowa woman is being honored with a medal for surviving diabetes for 50 years.

Mary Noffke, of Webster City, is a recipient of the Boston-based Joslin Diabetes Center Medal for “living courageously” with Type 1 diabetes. Noffke was first diagnosed in the mid-1960s.

“The diabetes did not show up until I was a sophomore in college and I was put on insulin right away,” Noffke says. “I’ve been insulin-dependant since 1965 so I’ve survived a long time with it.” It’s difficult for today’s diabetes patients to understand how traumatic it was to be diagnosed with the ailment in the ’60s.

“I will tell you that the treatment in that era, and even before, it was even worse,” Noffke says. “Treatment was almost barbaric simply because not enough was known about it. It’s a wonder anybody survived that era.” Noffke is one of 3,500 people to receive the medal that is named after diabetes research pioneer Elliott P. Joslin. Several decades ago, it used to be awarded to people who’d lived 25 years with diabetes, as that was considered a major landmark.

“I will have to thank everybody who has donated money to the cause for the research,” Noffke says. “They began to come up with medications and then the insulin pump which is a wonder. I went on the insulin pump in 1997 and it totally changed my life.” Noffke applied for the medal in January and received it last month. She says it’s a big honor to receive it after after living as a diabetic for 52 years.