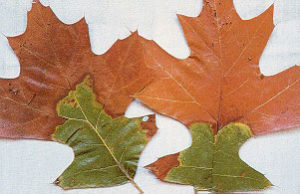 After the second-warmest February in Iowa history, homeowners are being warned to avoid doing any pruning on their oak trees or it could leave the trees open to diseases, like oak wilt.

Tivon Feeley is a forest health program leader with the Iowa Department of Natural Resources and says don’t prune any oaks after next Wednesday, March 15th.

“With this weather that we’ve got coming up this weekend, we’ve got a cold spell so that’s hopefully going to kill some of those insects that might carry the oak wilt fungus around,” Feeley says.

Oak wilt is caused by a fungus that’s been in Iowa for years and it impacts species like red, black and pin oak, as well as white and bur oak. It can lead to leaf discoloration, wilt, defoliation, and eventually, the tree’s death.

“If a tree already has oak wilt, the fungus can move below ground through root grafts,” he says. “If that happens, you would need an arborist to come out, take a look, assess the situation and see if there’s any way to break up the roots that are grafting below ground and prevent it from moving from tree to tree to tree.” A healthy tree can be infected by the fungus through open wounds during the growing season, which is why the March 15th deadline for pruning is in place.

“Let’s say we had a severe storm come through and you needed to prune after March 15th, that’s where we would look at using paints,” Feeley says. “You would prune that wound and then paint it immediately. That would keep the fungus from getting in when the picnic beetle comes in and feeds on the sap. They carry the fungus inadvertently into the tree.” Learn more about oak wilt and how to prevent it at: www.iowadnr.gov/Conservation/forestry.