You are here: Home / Fires/Accidents/Disasters / Investigation continues into deadly fire in Webster City 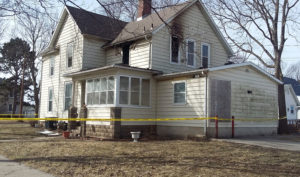 One person died and another was injured in a fire at this Webster City house.

Investigators haven’t yet released the name of the man who was killed in a housefire in Webster City late Wednesday night. Fire Chief Chuck Stansfield says when first responders arrived at the home, the fire was well underway on the second floor.

“Fire crews immediately began fire attack and search and rescue,” Stansfield says. “They located two victims and pulled them out. Lifesaving efforts were begun on both victims and they were transported to the local hospital.”

The chief says one of the residents couldn’t be saved. “One of the victims was deceased upon arrival at the hospital,” he says. “The second victim was life-flighted to Iowa City and is currently in critical care.”

The cause of the fire isn’t yet known and the state fire marshal is looking into it.”It’s still undetermined at this time,” Stansfield says. “The origin is pretty clear, upstairs, back room. The cause is still under investigation.” He notes the house was originally a single-family dwelling that had been subdivided into a dual-occupany unit, one upstairs, one downstairs.