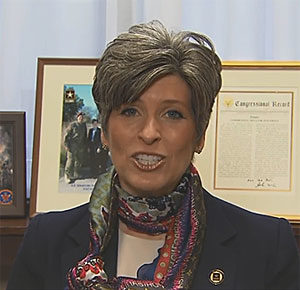 Iowa Senator Joni Ernst says she’s just started reviewing the proposal in the U.S. House to replace Obamacare and isn’t ready to say yet if she’ll support the legislation.

“What I am looking for is that I want to ensure that Iowans will have access to affordable coverage that meets their individual and their family needs,” Ernst says. Ernst, a Republican from Red Oak, says she hears a lot from people who want the plan replaced.

“So many of the families and individuals I talk with have come forward and they’ve stated ‘sure now we’re covered by Obamacare, but it’s still too expensive, I can’t go to the hospital because of the out-of-pocket costs and high deductibles.’ So, we’ve heard many times about the premiums that have increased significantly and the frustrations families have,” Ernst says. Ernst says one of the things she has seen that she likes is allowing people with preexisting conditions to get insurance.

“As it has been put in the package right now, those preexisting conditions will be covered. There is also a provision in the current package that allows for children to be covered on their parent’s policies through age 26,” according to Ernst. “Those are two of the biggest things that we hear about, so those should really please a lot of people that we took that into consideration.”

Ernst was asked if getting the replacement for Obamacare promised by Republicans is proving to be more difficult than they thought. “I think that we have known that it was going to be complicated, but we have to have the fortitude to work through this to make sure that if families are covered that they actually can go to the doctor,” Ernst says.