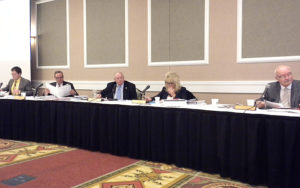 Members of the Racing and Gaming Commission at a recent meeting.

The Iowa Supreme Court says state regulators can consider the economic impact when awarding new gambling licenses, and there’s no automatic requirement for issuing a license to a county that wants one.

Cedar Rapids lawyer Eugene Kopecky sued the Iowa Racing and Gaming Commission after they voted against awarding a gambling license to Cedar Rapids in 2014. Kopecky argued the IRGC must approve a license once a county gambling referendum passes, and said the commission should not have made its decision based on the economic impact on existing casinos.

The Supreme Court also ruled against Kopecky on the second point as well. The ruling says the legislature’s requirement that nonprofit license holders give at least three percent of gross profits back to the communities is evidence lawmakers deem the economic impact of casinos “is an important function of legalized gambling.” It says

The ruling settles the question in the 2014 action by the IRGC and could have an impact on upcoming action as well. Three new proposals for casinos in Cedar Rapids have been presented in to the commission and the regulators are reviewing proposals from 6 companies to conduct another market study on gambling that focuses on the impact of a new casino in Cedar Rapids.