You are here: Home / News / Governor and other Republicans respond to King’s tweet 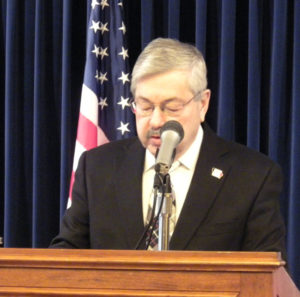 A racially-charged tweet from Iowa Congressman Steve King is prompting criticism from both sides of the political aisle. King, a Republican from Kiron, sent out a tweet Sunday indicating he supports a right-wing Dutch politician who opposes immigration and has spoken against Islam.

That prompted Republican Party of Iowa chairman Jeff Kaufmann to issue a statement, saying Duke’s words are “absolute garbage” and disagreeing with King, adding: “We are a nation of immigrants and diversity is the strength of any nation.”

Iowa Governor Terry Branstad responded today during his weekly meeting with reporters. “I disagree with what Steve King had to say and we certainly don’t want David Duke and his kind to come to Iowa,” Branstad says. Branstad was pressed about whether King’s comments are becoming a bigger problem for Republicans.

Lieutenant Governor Kim Reynolds responded to the question if King’s comments represent the feelings of people in the Fourth District he represents.”I don’t believe it’s reflective of Iowans or Iowa values, so we disagree, I strongly disagree, and I do not believe that that is reflective of Iowans throughout the state,” according to Reynolds. Branstad also commented on whether King’s statement reflects “the values” of the Fourth Congressional District.

“This statement certainly doesn’t,” Branstad says. “On some things like renewable energy, we work with him on, and certainly he’s got a district that’s got more renewable energy than any other congressional district in the country. And obviously that’s something that we care deeply about and he does as well. But we disagree with this kind of a statement.” Iowa Agriculture Secretary Bill Northey was at the weekly news conference to talk about another issue. Northey was asked about King’s statements as he endorsed King in the last election.

Northey says he supports the comments of the lieutenant governor and governor on the issue. “You know Iowans are very clear about how they feel about these issues. I’ve certainly been a supporter of the congressman on many, many issues, and would continue to support him on those issues and disagree with him on others,” Northey says. Northey says he supports King on agriculture and renewable energy issues, but says there are times when there are disagreements with King, as he says there are with anyone.

“You know there’s comments that are different than lots of other folks would make. And I think everybody is an individual and we treat everybody as an individual,” Northey says. ” I think the governor said it right that ‘Steve King is Steve King’ and every person is different and take it at face value.” The governor followed up and said they have to “look at the totality of the situation with each individual.”