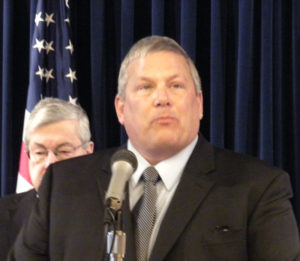 While the thoughts of most Iowans are on the good things that spring brings, poultry producers are on the lookout for potential problems with bird flu.

Cases of the two types of avian influenza have been found in Tennessee and Wisconsin, and Iowa Agriculture Secretary Bill Northey says it’s another reminder to be alert. Iowa took a massive hit from the bird flu two years ago when millions of chickens and turkeys had to be destroyed.

“Our producers have invested large amounts of effort and dollars into biosecurity trying to keep the disease away from their farms. From truck washes to limited access onto the farms, to lots of ways to try and keep the disease out,” Northey says. “So that was done from sometimes before the last outbreak, to immediately after the last outbreak.” He says the news of the case that is highly contagious in Tennessee probably led to some uneasiness in Iowans.

“I’m sure everybody is checking their biosecurity plans again. There is no guarantee to prevent a disease from being able to be exposed. And it’s obviously in the Mississippi flyway now in some wild birds — whether it’s a few or a lot, nobody knows. Everybody’s concerned while they continue the plans they have had in place,” Northey says.

Northey says there’s no reason for consumers to be concerned. “It’s important to remind everybody that food safety is not a concern. Go ahead and eat your eggs and eat your turkey meat and chicken meat, that’s not a concern. Producers are concerned about the health of their birds and they are doing everything that they can to keep their birds healthy,” according to Northey.

Thousands of chickens were destroyed at the Tennessee farm after the “highly pathogenic” variety of the disease was found there. Another bird flu outbreak was reported at a Wisconsin turkey farm but it was not the highly-pathogenic variety.