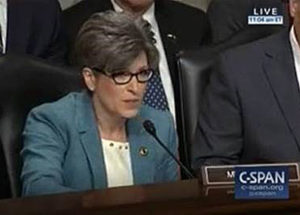 Iowa Senator Joni Ernst today said she is “very disappointed” and angered by the conduct of thousands of male soldiers who have posted and viewed naked photos of female soldiers on a private Facebook page.

“There is absolutely no excuse for this,” Ernst said, “especially for those who wear our nation’s uniform.”

The “Marine United” Facebook page was created as a private meeting place for active duty and retired Marines, but a veteran who runs the “War Horse” news site recently revealed photos of female Marines were being posted on the Marines United page.

Ernst, a retired Iowa National Guard commander who is a combat veteran, spoke today during a U.S. Senate hearing with two Marine Corps generals. “Those who participated in these disgusting and horrible actions have not only failed our Marine Corps, they’ve failed the men and women who wish to join your ranks,” Ernst said, “and they have failed our country.”

Ernst cited additional reporting which indicates similar activity in other branches of the military.

“This is a cultural problem, not just in our military, but society at large and hearing that many individuals were not surprised about these reports disappoints me. Hearing that there may not be a way to hold many of the people that were involved in this accountable, that angers me,” Ernst said. “Illegal or not, members of our community need to know this they type of activity creates a culture that leads to sexual assault.”

Marine Corps leaders admit investigators are having trouble identifying “Marines United” Facebook users for possible prosecution or discipline within the military, plus spin-off websites are popping up with links to the naked images of female soldiers.