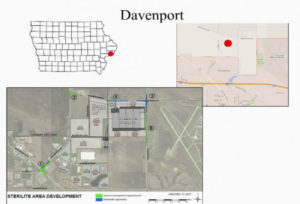 The DOT’s Craig Markley told the commission that Davenport sought a grant to improve access to the proposed Sterilite plant on the northwest side of town. He says the total cost for the propose site for Sterilite Corporation is more than $1.6 million with a recommended grant of $1.2 million.

“This will result in the creation of 100 full-time jobs along with the associated capital investment of more than $74 million,” Markley says. Davenport Alderman Jason Gordon was on hand for the meeting. He says they’ve had four RISE grants in the last two years of around $12 million and says in the case of the Kraft-Heinz plant it allowed them to retain jobs, and in this case they are adding jobs. This project in Davenport is anticipated to be completed by November 2018.

The commission also approved a RISE grant for Rock Valley for roadway improvements on the east side of town that will provide access to 15 lots totaling more than 29 acres for manufacturing, warehouse, and professional office purposes. “Total estimated cost of the project is $728,018 dollars. The City of Rock Valley is requesting a RISE grant of $364,059 and will be providing 50 percent of local match,” Markley explained.

The Transportation Commission Approved a third RISE grant of nearly $2.7 million for a project to provide access to the Cedar Rapids Land and Air Super Park. It’s an Iowa Economic Development Authority certified site of more than 539 acres for light industrial development.

The Revitalize Iowa’s Sound Economy Grants can require cities to create jobs, and the commission today reached a settlement with Burlington a grant that didn’t meet the goals. Markley explained the details. “The city received a grant of $923,000 for roadway improvements contingent on the creation of 118 new jobs by C&H Manufacturing within three years of project completion,” Markley said. “In November of 2013 the roadway was open to traffic. However, the company associated with this project was only able to create an average of 53 jobs,” Markley said. He said the city agreed to pay back $155,989.